My father once owned a trucking company where I worked as head of dispatch. I was responsible for keeping approximately two dozen trucks moving. I also worked for the nation's largest merchant and was familiar with shipping there as well. Enormous pressure is put on transport companies and drivers to get the goods to the consignee(receiver) of the goods. Enormous pressure is also placed on transport companies to get a signed bill of lading(receipt for delivery to the consignee) so that the carrier or trucking company can get paid or free up equipment needed for another consignor(shipper). This pressure that is placed on a truck driver and his equipment has wreaked a lot of havoc on America's roads. A driver, due to being overworked and the like, can easily make a miscue sending 80,000 pounds hurtling through a family vehicle. And the trucking company, being financially burdened or over-committed, can fail and neglect to maintain a truck which can cause a fatal or near fatal accident as well. Call the Esther Law Firm if you or someone you know has been injured in a Semi-Truck accident. 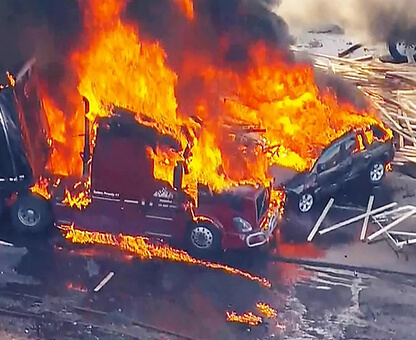